How To Pick The Best Captain in NRL SuperCoach

By Worldwide Fantasy Club May 09, 2017
NRL SuperCoach is a highly touted fantasy sports game that many Australian and international people participate in. Many SuperCoach Squads have totally different make-ups, with the vast spread of playing talent in the National Rugby League. For SuperCoach managers, selecting a captain that provides good points returns is a hard decision that all participants must face each week. Many managers opt for the method of captaining the player in their squad that has the highest and best seasonal average, but is this really the best method to gain an advantage on other players?

Three promising approaches to the decision of the captaincy dilemma include,

All three methods intertwine with each other and we at WFC believe that using these methods provide a more solid approach to continually gaining big captaincy returns throughout the season.

More important than any other factor when selecting a captain in NRL SuperCoach. Form plays a huge role in players giving points returns. This seems like a no brainer to SuperCoach managers, but form is a component of the game that is commonly misunderstood. Regularly relied upon is players seasonal averages, with the higher the score believed to be the smarter captaincy pick. However, seasonal averages can be skewed by one-off monumental games. Granted, towards the end of the NRL season these averages give a good indication of player returns. However, it is the start of the season when league leads and overall rank is achieved, as teams are being sorted out and hidden gems are being discovered before other managers can capitalise. The best form guides to utilise are the 3 and 5 game averages, given in the statistical player tracking tables. This provides fantastic insights into which players are hot, and which are not. Historically SuperCoach players have form spells that correspond with this statistic. Players generally have 5 top quality games consecutively before dropping back into the pack for their respective positions. Finding players and captaining them while they are on a 2 or 3 game form streak is a wise decision, as statistically it is expected that you can get another 2-3 games of high points returns out of them. Using this tactic can prove fruitful as many managers change captain’s each and every week. Sticking strong and focussing on form guides can gain the edge on other managers. 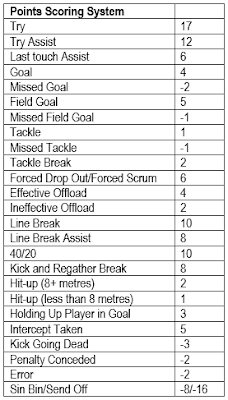 The SuperCoach points system is a technical dilemma when attempting to predict the returns when placing the captaincy on certain players in the league. In order to more accurately identify who to captain, managers should look at player base points. These include skills and match statistics that a player is almost 100% certain to attain each week, though matter who the opposition that they are playing. Statistical analysis of high work rate players who make significant tackle counts, offloads and hit-ups are good captaincy choices week in, week out in SuperCoach, as managers are given a base of points to stabilise their team each match-day. These base points are virtually guaranteed for your team, and very often are boosted with a potential extra return of a try, try assist or line break. Base points apply to both forwards and backs as they excel in different areas of the scoring system. Forwards return more tackle and hit-up points, while backs return the lustre of line-breaks and try’s. When initially building a SuperCoach team, managers should consider base points as their priority. Forwards and hookers, the likes of Elijah Taylor, Andrew McCullough, Martin Taupau and Cameron Smith have huge match workloads that majorly benefit SuperCoach managers. Along with these stats, attaining and captaining players in your SuperCoach team that are high conversion rate goal kickers can make the difference in league and rank achievements. For every goal converted the player is awarded a hefty 4 points. For high scoring teams such as the Canberra Raiders, Jarrod Croker becomes an excellent regular captain choice as he is awarded many additional points for his goal kicking prowess (82%).

Opposition quality is necessary to take into account when choosing captains in SuperCoach. Captaining efficient scoring players when they are playing at home has historically proven a good decision. Players are more than likely to better their average scoring output when playing weaker opposition as the point scoring system can be exploited. Players can make more hit-ups in total, with more being over 8 metres (2 points). Additionally more tackle breaks are made which in turn leads to line-breaks and ultimately try’s and goals. Captaining goal kicking backline players is a must when fixtures are considered easier than usual. Players like Clinton Gutherson, Jarrod Croker and Dylan Walker become enticing captain prospects when home fixtures against teams like the Newcastle Knights, Wests Tigers and Gold Coast Titans roll around. However, due to the spread of playing talent in the NRL, more than any other sporting league in Australia, upset losses do occur and your captain doesn’t return anything to be desired. However, following a process will provide better differential returns across the season as a whole.