WFC is tipping that the Storm will go all the way this season, with a last day grand final win to cement the ‘Big 3’ legacy, before splitting up. As the best and far most superior team all season long, it is hard to argue, after only 4 losses during the campaign, 2 of which occurred during the State of Origin period where a host of players were on rep duty.

As for the other teams attempting to derail Melbourne’s fairy-tale – the Brisbane based side has the best chance at doing so. After nearly slipping to 4th position after a dominate season, the Broncos will look to utilise their lively creativity in the halves and pace in the backline to over-run the Roosters in their week one matchup, to earn a week’s rest and sit one win away from the final.

The Roosters however, will bounce back in the Prelims, as their far superior squad will get over an up and down Manly, who themselves will advance from the bottom half of the draw after defeating the Penrith Panthers in back-to-back weeks. Mental psychology in this game will play a big factor, as in round 26 Manly jumped out to a big lead. The Panthers will put up a bigger fight this time but it won’t be enough.

We at WFC also believe that the experience of Cronulla’s premiership campaign from a season ago will see them comfortably get past a gallant North Queensland side in week 1, while using that finals experience in week 2 to defeat a hot Parramatta Eels outfit, before just falling short of another grand final – losing to the Broncos.

As for the Storm who are tipped to win the premiership, their semi-final match-up against the Roosters will be a hard fought effort – possibly even heading into an overtime finish.

With WFC predicting a repeat of the 2006 premiership grand final between the Storm and the Broncos, the result will see a reverse of that day with the Melbourne side successfully avenging last year’s narrow defeat. This victory will see the end of an era of Melbourne mastery in typical classy style.

So, with that all being said – Here is WFC’s NRL Finals brackets 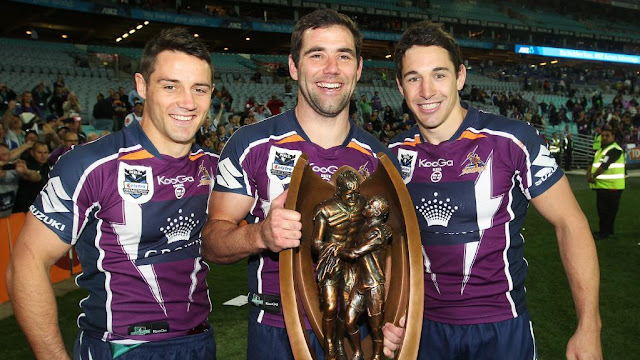