By Worldwide Fantasy Club January 06, 2018
After all the regular season games have been completed we have come to the best time of the NFL season – The Playoffs, that lead to the greatest single game show on Earth in the Super Bowl. Last year we were treated to a memorable playoff series and a historic Super Bowl spectacle and performance by one of the greatest ever to play the game. But as the saying goes, the past is the past and this year we will be treated to new drama, excitement and anticipation.

So, with the playoff picture set WFC is here to predict who they think will advance through the Wildcard round to the Divisional round and onto the Conference finals before reaching and potentially winning the Super Bowl and in turn becoming the World Champions.

Before a prediction is made let’s take a brief look at the teams involved and how the Playoff picture is set:

They have the quarter-back that has been clinical forever. They have the obvious experience. They have the home field advantage and the bye week in round 1 of the playoffs. They lead all teams in total offense per game and Tom Brady produced 4577 pass yards in the regular season (1st). All this put together looks very ominous to opponents wanting to dethrone the Brady era and prevent back-to-back Super Bowl victories.

Big Ben has to continue to produce the goods in the playoffs like he has in the regular season. He sits 5th in passing yards (4251) with 28 TD’s and 14 picks, giving him an good QB rating of 93.4. With Le’Veon Bell (1291 rushing yards) and Antonio Brown (1533 receiving yards) also producing along with a solid 5th ranked defense (306.9 YPG) the Steelers are primed.

All about the ground game, Jacksonville defensively are rank 2nd for total yards (286.1) and 1st for passing yards conceded (169.9), with AJ Bouye leading the way with 6 interceptions this season. Additionally they have a strong ground offense game as well, leading the league in rush yards per game (141.4)

Key to Winning: Dominate the Ground

The rush can do wonders with Kareem Hunt topping the regular season leaders with 1327 total yards. In addition to the stylish Alex Smith in at the QB position, offense looks pretty solid. Smith threw for 26 touchdowns and only a mere 5 interceptions in his 15 games (QB rating 104.7). Despite getting sacked 35 times – 7 more than last season, Smith only fumbled twice – a reduction from 7 fumbles in as many games last season.

Defense is a necessity to have and the Titans need to hold solid. Sitting in 4th after the regular season for total rush yards allowed (88.8 YPG), they can also cover the air with Kevin Byard collecting 8 interceptions in 16 games. Ranking 19th for total points and 23rd for total yards gained per game the Titans have to be aggressive without the ball and safe with the ball.

Possessing the leagues tackle machine Preston Brown, who lead the league with 144 tackles in the regular season, the Bills still had a hard time making the playoffs. 18.9 points per game (22nd), 302.6 total yards (29th) and 176.6 pass yards (31st) is a dreary board of numbers, but the courageous efforts of LeSean McCoy in offensive rushing, ranked 4th with 1138 yards and 6 TD’s to his name needs to be an inspiration in the wildcard game and possibly beyond.

Key to Winning: Tackle and Rush like Never Before

Defensive effectiveness and offensive efficiency has been key all season. 1st in defensive rush yards (79.2) and 3rd in offensive rushing (132.2 YPG). Along with a QB that can throw the ball for scoring plays in Carson Wentz who racked up 33 TD’s to lead the Eagles to an average 28.6 points per game (3rd). Philadelphia has become a serious threat.

The complete defensive package. Sitting comfortably in the top 3 for Total defensive yards (275.9 = 1st), defensive pass yards (192.4 = 2nd) and defensive rush yards (83.6 = 2nd). The Vikings are a well-oiled machine that works for each other with no one player being a far standout statistically, but all players contributing greatly to the team’s success.

Scoring became a regular occurrence for the LA side, having averaged 29.9 points per game to lead all NFL teams. Despite this scoring output the Rams didn’t rank in the upper tier (Top 5) of teams for pass (10th) or rush (8th) yards per game, having a total offense yards rank per game sitting at 10th (361.5) This suggests that field position has been good when LA take possession of the ball. Todd Gurley has been immense when running the ball with 1305 total rush yards to sit 2nd among all players to go with 13 TD’s.

A legendary QB who wants another ring before a possible retirement. Drew Brees finished the regular season 4th overall for passing yards with 4334, 23 touchdowns, only 8 interceptions and a QB rating of 103.9. Additionally, the Saints have other weapons at the disposal in the team with running back Mark Ingram recording the 5th most rushing yards (1124) and Cameron Jordan also ranked 5th for sacks with 13.

A potential dark horse in the making with a QB that has that special something when it comes to big plays. Playing the entire season injury free and averaging below expected could make for an explosive playoffs birth. Cam Newton passed for over 3300 yards in the regular season, while also relying on a decent team rushing game of 132.2 YPG – 3rd in the league. Along with a 3rd ranked rushing defense the Panthers have a decent game on both sides of the ball.

Key to Winning: Get Momentum

The Iceman needs to be exactly that in the playoffs, forgetting about what occurred 12 months ago and treat this season on its own merits. With a decent return of 20 TD’s in the regular season, Matt Ryan passed for over 4000 yards but had a lower than expected QB rating of 91.4. The link up with Julio Jones who made 88 receptions for 1444 total yards (16.4 yards per carry) was instrumental to getting back to the playoffs, along with Deion Jones’ tackling effectiveness – 4th most tackles among all players (138)

Key to Winning: Ice-Out The Past

So, with the teams looked at, now comes time for the predictions: 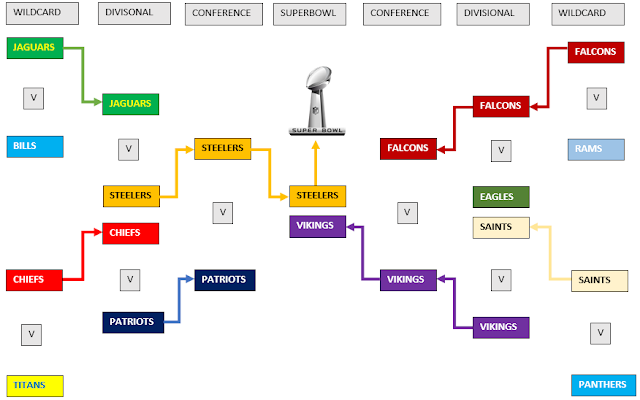 By Luke Scali - Twitter @WFC_LS_Potzi
NFL
Worldwide Fantasy Club
WFC is an Australian based fantasy sports & tipping page, run by @WFC_Seb & @WFC_LS_Potzi (twitter). As long time fantasy managers in a range of competitions, we hope that sharing our knowledge & experience can help you through those tough dilemmas we all face.