By Worldwide Fantasy Club February 28, 2018
It's that time of the season again. The FPL run-in. With only 10 gameweeks (GWs) remaining in the 2017/18 FPL season, one mistake can derail a season's worth of good work. These GWs are probably the most important of the year, but also the most challenging.

As a result, we have complied 5 top tips to keep you in good stead for the FPL run-in. These tips have been provided by members of the FPL community, and we have explained why the tips are relevant and useful.

If you want to protect your rank, captain safe picks.

At this stage of the season, picking the wrong captain could be fatal. Whilst you have a low score for the week, thousands of other FPL managers could have used one of their remaining chips successfully, giving them a massive rank boost.

So, if you are happy with your rank, look to consolidate by playing it safe and picking a proven, in form FPL asset who is popularly owned. By doing this, you are significantly reducing the chance of a large rank drop, because if your captain fails, so will the captain of most other FPL managers too.

For example, in the 2016/17 season, I had a quite high rank, but wanted to push into the top 10k. As a result, I ignored safe captain picks such as Eriksen and Hazard, and captained the differential Negredo (bou, SUN) in DGW34. Negredo blanked, and my rank fell significantly. In DGW37, I again took a risk, ignoring popular captain picks Jesus, Kane, Coutinho and Sánchez, instead captaining Aaron Ramsey (stk, SUN). Ramsey scored 6 points, whilst the others all scored 19+. Thus, my rank plummeted again.

If want to gamble on a player, but you don’t want to risk a large rank drop, you can bring a differential in, but captain highly owned players.

In the words of Chief, to consolidate your rank, be boring in terms of captain picks at this stage of the season.

Focus on points only now, not team value.

However, according to Stag, FPL managers should not focus too much on team value at this stage of the season.

Instead, focus should solely be on points. With so little GWs left, you should be putting all your effort into attaining as many points as possible.

In this way, if you still feel a player is worthy of selection in your FPL team, do not take them out just because they are dropping in price. Similarly, don’t bring a price rising player in over another player just because of the price rise – bring in the player you think will score the most points.

For example, in GW7, despite Jesus’ form and favourable upcoming fixtures, he had just been rested and was falling in price, so I transferred him out for Morata, who was rising in price. Morata then got injured and fell £0.2, and Jesus scored 18 points in GWs 7-8, rising £0.3.

Performing such a transfer at this time of the season should be avoided.

As Stag says, there’s no reward at the end of GW38 for having a massive team value.

There are not many things worse in FPL than thinking up of a great transfer, only to be just short in terms of cash.

So, to prevent this from happening, be sure to plan ahead at this stage of the season.

This is especially important ahead of the double gameweeks if you have already used your wildcard.

Once you have examined the fixtures, write down who you want in/out in a certain GW. For example, ‘GW30: C.Wilson > Niasse.’ Do this until you have all the players you want in your team.

After this, go through each transfer week by week on the FPL transfers page and see if you have sufficient funds to make your desired moves. If not, think of a different player to take out, or a cheaper player to bring in. Do this until you can fit all the transfers in under, and make sure to leave about £0.3-£0.5 in the bank to cater for price rises.

If you do this, you will cut out instances where you are just short of being able to make a transfer.

Furthermore, planning ahead means that FPL managers will be less likely to burn transfers unnecessarily, as they will be aware that the transfer will be required down the track. 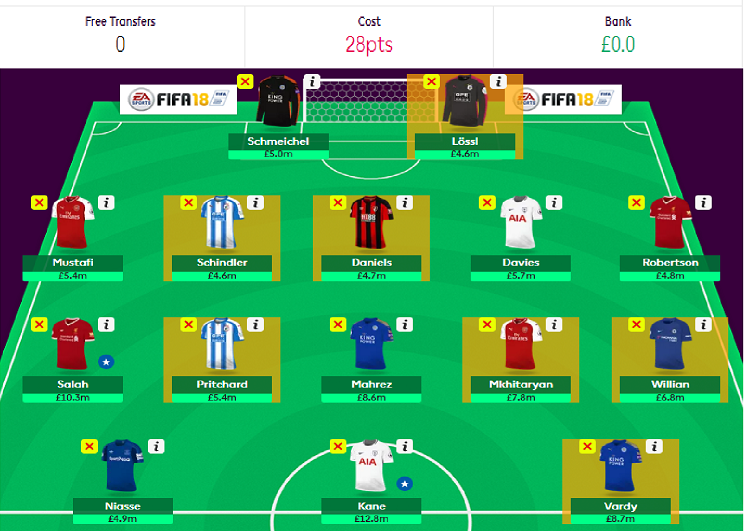 Although many of the final games of the Premier League season can be chaotic, where upsets occur due to the desperation of some clubs to avoid relegation, cement a top 4 spot, or clinch a title, it is also a period of the season where FPL managers are looking to solidify their rank.

For many FPL managers, they see a dip in their overall rank at this time of the season due to taking unnecessary risks and transfer hits in order to win mini-leagues and claim off-season supremacy and bragging rights.

For managers to not see a decrease in overall rank, it is a good measure to pay close attention to fixture difficulty and fixture certainty.

By the back end of the season (final 10 games), it has become vastly evident what EPL clubs are proficient or deficient in certain areas of the field. Stoke (54) and West Ham (50) have conceded the most and second most amount of goals in the league to date and with Stoke facing Arsenal, Spurs and Liverpool in their remaining games, it is a best bet to stock up on opposition attackers like Aubameyang, Firmino and Kane whose teams sit second, third and fourth in team scoring.

This seems like a no brainer for FPL managers, but many of us slip into the train of thought that we need to take risks on players that have a 50-50 chance of performing well, in order to get the edge on mini-league or overall rank opponents. From the past, the likes of Dusan Tadic come to mind, who one week can score a 24 point return and then go invisible and blank for 10 weeks.

Additionally, taking a punt on a player like Pascal Gross (Brighton) who has recently been getting ditched but has an “alright” run of fixtures and performed relatively strong this season in an attempt to capitalise on points is a poor decision. Some of Brighton’s fixtures include Everton, Leicester, Huddersfield, Crystal Palace and Burnley, but for a side like Brighton who sit 14th in the league, these games are just as losable as they are winnable. The likes of Willian, Jesse Lingard and Cesc Fabregas, whose teams are more than likely to win most of their remaining fixtures, are safer options for returns in the run in.

Furthermore, the fixture dilemma becomes a major factor during double DGWs, where 2 games is a hopeful excuse to take a hit and bring in a player like Chicharito or Christian Benteke that may have 2 fixtures.

In the past, single GW players have been just as proficient in scoring returns as DGWers should the fixture be favourable.

This season for instance, in DGW34, Liverpool will be playing one match against Bournemouth at home, whilst Southampton will be playing against Chelsea at home and Swansea away. One of Southampton’s fixtures is favourable (Swansea) but it is unlikely any player will perform in the Chelsea fixture, making a Southampton hit transfer for the sake of the 2 games unfavourable. Instead a double-up or single transfer of Mo Salah, Roberto Firmino or Sadio Mane is a far better option, even though Liverpool only have one match.

Remember - fixtures are the main element in maintaining your overall rank right up until the end of GW38, so keep checking those fixture ratings. 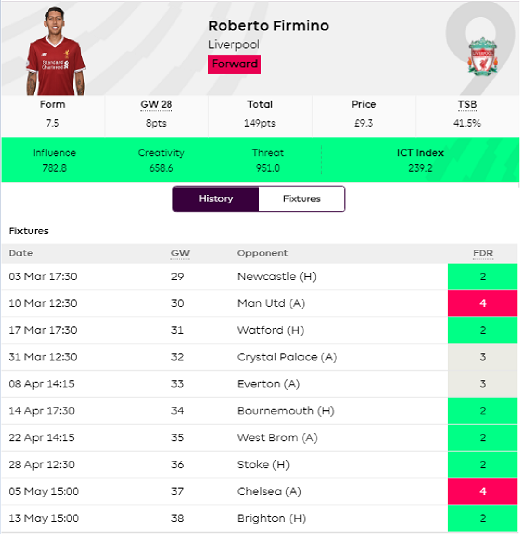 Ensure you have a deep bench and be flexible.

It’s great to plan ahead, but you also need to be flexible.

Don’t go into the back end of the FPL season with limited tactics available. Make sure you have 15 players in your team that regularly start for their side.

Ben identifies that around the DGWs and as sides progress deeper into European and domestic cup competitions, managers tend to rotate and key players will be rested as fixtures are prioritised.

As a result, having 15 starting players will ensure that even if someone is rested, you will have points coming off the bench.

Moreover, a deep bench will enable your team to switch between different formations depending on which players are available and in or out of form.

Being flexible by having starting players on your bench as well as multiple players who would make top captain picks will limit the likelihood of moments of panic should one of yours players get injured or be rested. 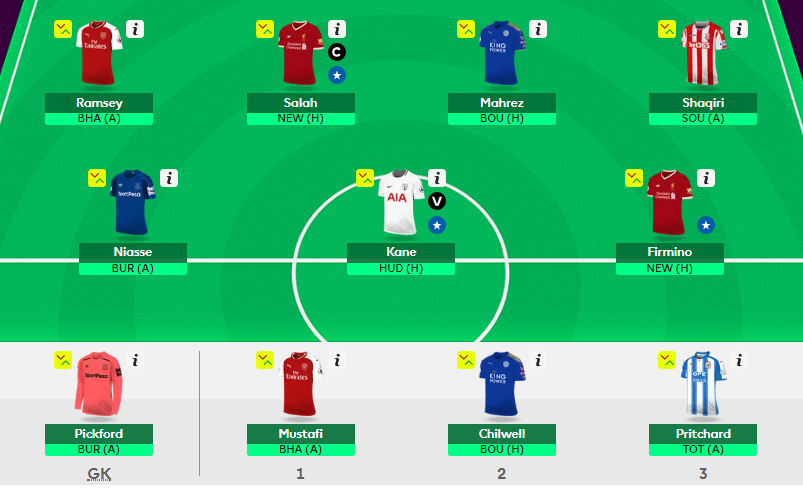 
Special thanks to Chief, Stag and Ben for their input.