By Worldwide Fantasy Club June 03, 2018
Why LeBron James is the Greatest Basketballer of all time and is ahead of Michael Jordan.

First things come first and at WFC we understand that in the greatest of all time debate, titles and championship wins should count for a lot of the argument as in all sports alike, winning is the pinnacle to success. But, with every debate all aspects need to be considered, and championships aren’t the only telling factor in how great someone has been across their career.

Sure Jordan was 6 of 6 in NBA finals with 6 finals MVP awards to go with it, but, without the amount of rings part of the argument, how many aspects of the game is Jordan better than LeBron at?

As a basketball player, we at WFC believe that LeBron has surpassed Jordan as the GOAT, despite what many others believe when looking at LBJ’s finals record of 3-5 and likely soon to be 3-6 by facing the Warriors again in 2018.

Now, as we examine the NBA Finals and LeBron’s record in comparison to Jordan it is no question that Jordan takes this aspect of the game, which puts a great drive behind Jordan being better. However, if the GOAT argument hinges on amount of titles won, should Jordan even be talked about in that light? Bill Russell has 11 titles – almost double Jordan but no one truly ever considers Russell in the GOAT argument. Why is that?

As fans, we brush over Jordan’s flaws of taking years to get to the finals, retiring and playing minor league baseball and then moving to Washington and failing miserably, but with LeBron we scrutinise every game and moment of his career as it is the current iteration of greatness presented to us. Our memories have become “foggy” over time and the best of moments are all that are remembered from the past – thus making the argument of the GOAT at the current time seemingly swaying in Jordan’s favour. But in 10-15 years there won’t be any form of debate as LeBron’s career will be looked at with a slight haze and he will undoubtedly be the unquestioned greatest ever.

Basketball is a highly statistical and analytic sport.

So, let’s get into some stats and figures that can assist in distinguishing LeBron as the GOAT, 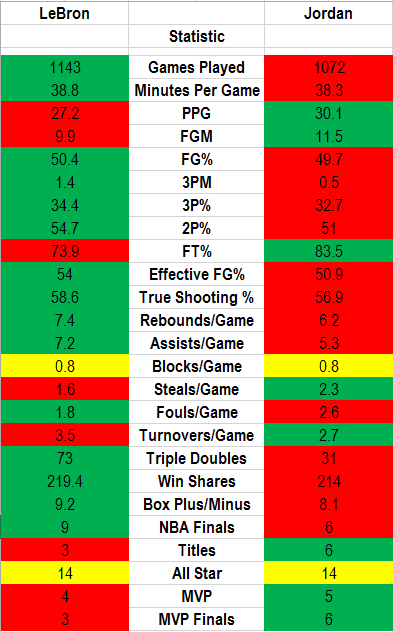 As seen from 25 statistics that are good reference points for a discussion of the greatest, LeBron leads in 14 of them, with Jordan only closing the gap on LeBron with the titles, MVP and finals MVP awards. But as a basketball player, not as an accomplished player, LeBron not only beats Jordan, he destroys him in some key stats – Rebounds, Assists, Box Plus/Minus and Effective Field goal percentage. Additionally, Jordan average 2.9 more points per game than LeBron over the course of his career but did it on 3.3 more shots per game. If they were to take the same amount of shots, LeBron would also beat Jordan in the shooting department, which was always considered the best aspect of Jordan’s game – “he was a dominant, lights out shooter” while LeBron is considered a facilitator rather than a scorer.

Aside from these statistics other measurements that need to be examined in the GOAT argument that don’t show up in analytics are longevity, versatility and durability. LeBron is clearly the better defender, is bigger, stronger and more athletic in covering and guarding all positions on the court, and has kept up his level of play and dominance for a greater period of time despite switching teams twice and playing with far inferior playing talent to that of Jordan over the course of his career.

LeBron is also the greatest playoff elimination game player in history. He excels in these games, by not only elevating his skills but also elevating his teammates abilities. In comparison to Jordan, LeBron yet again crushes him. In his 23 elimination games, LeBron averages 34.1 points, 48.9% FG and has a 14-9 record, while Jordan averages 31.3 points, 45.8% FG and is 6-7 in those games. 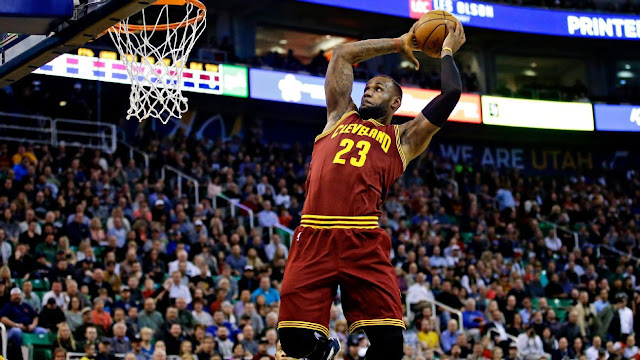 At some point in time we all have to consider that totality can trump short term greatness. We have gotten to a point now that we are punishing LeBron in the discussion of the GOAT for making the Finals and losing. Had he continually lost a playoff bracket before the NBA finals in the Eastern Conference finals and been 3-0 in the finals with 3 Finals MVP’s would we regard LeBron higher in the discussion? We will never know, but perhaps if LeBron moves to a third franchise after the 2018 season and wins a title with them he will solidify himself as the greatest. Not only could Jordan not win a title with a second franchise in Washington, he was an utter embarrassment where all stats decreased and his effectiveness diminished. This was year 15 for Jordan in the league. In year 15 in the league for LeBron (2017/18) he played all 82 games, increased his Fields Goals made (10.5), FG% (54.2), 3PT% (36.7), 2PT% (60.3), Rebounds (8.6), Assists (9.1), Blocks (0.9) and Points (27.5) all above his career averages. That is something to marvel at and congratulate LeBron on, and is a tribute to his conditioning and maintenance of his physical health.

In summation, after a devastating Game 1 loss after a JR Smith brain explosion, it all seems headed to a 3-6 record for LeBron in the NBA finals and an exit from Cleveland, with Philadelphia, Houston and the Los Angeles Lakers the likely destinations. If LeBron can somehow manifest a move to Philadelphia or possibly an unmentioned yet… Boston Celtics – even though Kyrie Irving will despise it (Kevin Durant joined the best in the West why not LeBron join the best in the East). If either of these moves come to fruition, LeBron will continue to lockdown the Eastern Conference, make the Finals and possibly win at least 1 or 2 more titles over the next 5 years to finish off his career.

With that being said, LeBron will end his career holding nearly all regular season, playoffs and Finals individual records along with most finals appearances and possibly 5-6 titles when all is done. How by that time could he not be the GOAT. Period.

And the final question WFC asks in this debate is – If the Earth is invaded by aliens and they challenge the humans to a game of basketball to save the world, who is the first person in all of history that we are picking in our line-up… The answer is a certain LeBron James. 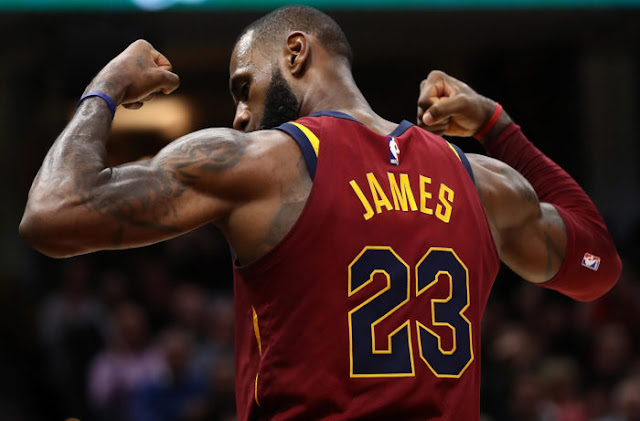 NBA
Worldwide Fantasy Club
WFC is an Australian based fantasy sports & tipping page, run by @WFC_Seb & @WFC_LS_Potzi (twitter). As long time fantasy managers in a range of competitions, we hope that sharing our knowledge & experience can help you through those tough dilemmas we all face.