By Worldwide Fantasy Club May 02, 2017
With two double gameweeks (DGWs) in the final three rounds of the season, as well as three home fixtures out of five matches during this period, the appeal Southampton FPL options is about to take a massive boost. Apart from Virgil Van Dijk, Charlie Austin is the only first team regular injured at the moment, although he has returned to first team training and could feature in the final game of two. With a full compliment of players to choose from, not only does Claude Puel have some big decisions to make, but so too FPL mangers!

So, what will the Southampton's starting line up look like in the last few rounds?

Due to the heavy fixture schedule, no player is 100% nailed on for the rest of the season as it is impossible to predict how the players will pull up after matches. With this being said however, Puel does have his first choice line up which he will go to when he has a chance: 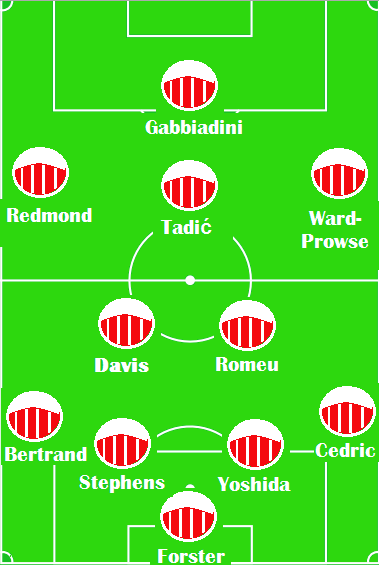 Forster in goals is the only player who is a guaranteed starter. Yoshida and Stephens will continue as the first choice centre back pairing, and Caceres provides cover if needed and may start one game, probably the first of GW37. Bertrand and Cedric will continue at left and right back, but McQueen and Martina could be called upon if needed. Oriol Romeu and Stephen Davis should continue in the middle of the park. They will be battled by Jordy Clasie and Pierre-Emile Hojbjerg who will be pushing for recalls, which they may receive in one or two games. The attacking midfield positions will be tough to call. When all players are fit, Tadić will start at no. 10, with Redmond on the left and James Ward-Prowse on the right. Redmond and Ward-Prowse have both received a rest in the last two GWs, so they will be rejuvenated and ready for the final few GWs. Puel is yet to rest his other attacking midfielder in Tadić, so don’t be surprised if he is rested for a match in GW36. Sofiane Boufal has started the past two games, but he did not impress and should drop back to the bench. If any of the first choice trio are suffering from fatigue, Boufal will be ready to fill in, as will Jay Rodriguez and Shane Long. Gabbiadini seems like the most certain starter out of the attacking options as he has had his minutes restricted since his return from injury, so he shouldn’t be suffering from too much fatigue. However, after his recent injury woes, Puel may also look to rotate him with Long or Rodriguez to ensure that there is not a re-occurrence of the injury. Charlie Austin could start the final game of the season, and he could fit in as a lone striker in a 4-2-3-1, or along side another striker in a 4-4-2.

Now, let's have a look at Southampton's remaining fixtures:

On the defensive front, the GW37 fixture against Middlesbrough looks particularly appealing, as Boro have the worst home attack in the league (16 goals). GW38 vs Stoke at St Mary's also promises well for the Saints defense, as Stoke have the third worst away attack this season (14 goals), and have not scored in 6 successive away matches. Although owning a Southampton defender playing Arsenal may not seem like the best idea, Arsenal have scored 1 goal or less in four out of their last 5 away games, so don't be surprised if the Saints keep a shut out in this one. The two matches that stand out as having limited potential for clean sheets are the home encounter with Manchester United and the away match against Liverpool. Liverpool are the league's top scorers this season, whilst Manchester United have only blanked away from home three times this season (against Liverpool, Chelsea and Manchester City), and have scored 11 goals in their last 5 away games.

Now moving onto the attacking front, Southampton’s fixtures offer serious potential. In GW36, they face Liverpool (away), who have only kept 4 home clean sheets from 17 games this season, and Arsenal (home), whose away defense has been abysmal, conceding 2+ goals in 8 out of their last 10 away games. In GW37, they will come up against Middlesbrough (away), who have conceded 2+ goals in 5 out of their 9 games against top half opposition this season. They will also play Manchester United (home) in GW37, and this is the only fixture where attacking returns seems unlikely. The Red Devils rear-guard has conceded the least away goals in the league this season, including 6 clean sheets and only 2 goals conceded in their last 8 away games. Finally, GW38 will see the Saints play Stoke (home) who have been extremely poor away from home recently, with only 1 point from their last 6 away games, conceding 11 goals.

So, all with this in mind, let’s take a look at the stats of Southampton players since GW21:

·        Due to Southampton’s heavy fixture schedule, there is a great risk of rotation among their players.
·        Forster and Yoshida are the most nailed on defenders, whilst Redmond and Gabbiadini look the safest options in attack after having their minutes restricted lately.
·        All of their fixtures apart from the Manchester United match promise well on the attacking front, whilst only the Red Devils and Liverpool will provide extremely tough tests for the Saints backline.
·        Despite Bertrand’s high average BPS and his attacking returns, there are better options from other teams in his price range.
·        Instead, FPL managers should turn to Yoshida, who is over £1.0 cheaper and ranks first in the CBI category, as well as picking up the equal most bonus points since GW21.
·        Cedric also provides great value at £4.8 given his attacking statistics, but a lack of bonus points and a greater tendency to pick up yellow cards (5 compared to Yoshida's 2) means that Yoshida should be FPL mangers’ first preference from the Southampton backline.
·        Attacking wise, Gabbiadini is clearly the best option, with the most goals, shots, shots inside the box and highest average BPS, despite 400-500 minutes less that Tadić, Redmond and JWP.
·        Second to Gabbiadini would be Redmond. This is because although Tadić has a significantly greater amount final third passes and assists, their shot frequency, shots inside the box, chances created and average BPS score are similar.
·        As a result, the £1.0 saved by getting Redmond instead of Tadić could be used to upgrade elsewhere.

By @WFC_Seb @WFC_17
FPL
Worldwide Fantasy Club
WFC is an Australian based fantasy sports & tipping page, run by @WFC_Seb & @WFC_LS_Potzi (twitter). As long time fantasy managers in a range of competitions, we hope that sharing our knowledge & experience can help you through those tough dilemmas we all face.